180
It was automatically
added to your profile counter!
It was automatically
removed from your profile counter!
You're invited by
has invited you to a game of ''
You need Premium membership to play online.
Information
You have a previous unfinished session of the game.
Click OK to continue to play this session or DELETE to end the session and start a new.
Well done! You've earned a badge!
Invite friends to GoDartsPro.com!
Invite your friends and practice & play together! We're adding a lot of social functions to the site so send invites to all your darter friends!

You'll be able to practice with, play against and compare your progress and achievements with your friends.
Thank you for inviting your friends!
Friend email (comma separated for multiple e-mail addresses):


Personal message to be included:

We have +75 games so it can be hard to know where to start. Which one is you?

If you're a rookie in darts, try the Quick Evaluation game first! Then it can be good to play these free games: JDC Routine, the A1 Routine or the Section 5.

Played for a while?

The MICO-factor games will sharpen your skills. Try the 19 Halve It, the 10-20 and the Pivot Bundle. Our Master Class will also improve your game.

We've got many great games for you! The Master Class is the path you need to go! Try also the Exponential Bundle, the Master-501 and the Shooting Gallery.

This is our new flagship, the Crown Judgement! You can play this game only once in a month, so you better get your focus right before starting this game.
Why only once in a month? Because we know that playing the same game over and over again gives you an edge – you get naturally in games which you practise! It’s human nature. So therefore we locked this bad boy for a month per time because you want to know your TRUE improvement, and a month is a decent time for that. Not more, not less, but a month.
This is a measurement tool like no other!

We divided this game in five different sections, which all are essential to everyone who loves and wants to compete in darts. This game lasts approximately one hour, so make sure before you start that you have got time for this. Also we recommend highly that you have a short break somewhere in the middle of the game.

You start by hitting MAJOR DOUBLES, which are the most important part of any darts players’ game. Mark the score after every throw, or if you trust your memory and want to have a bit of flow, you can mark after two or even three throws your hits up.

Then it’s time for BIG TREBLES, which is very similar to the previous division of this game.
Now you approach the part of the game called COMBO CHECK-OUTS and the rules get a bit trickier. You’ve exactly 6 darts to finish the first target score. But if you do it earlier, you gain extra points by hitting the same double again you managed to finish on! So in every turn of this game, all six darts are used. So read the instructions very carefully.

You’ve exactly 6 darts to finish the current target score. But if you do it earlier, you gain extra points by hitting the same double again that you managed to finish on! If you are busted and got darts left you continue to try to finish the checkout.

You can get anything between 0 to 6 points at every turn. Mark them up and fill in the form and you’re ready to move on to SCORING section of 36 BEST.
Now this one is easy again, all you need to do is to score as heavily as you can and mark up your scores after SIX darts.

After that, you are in the final stretch, The SHANGHAI NIGHTS. This is one that can make or break you, you can easily better your average doing well this game only! But there’s also pressure. First of all, you need to hit three different targets with your six darts per turn. Single, double, and treble, all of them only ONCE. You get a point from the correct single, correct double, and correct treble.
If you manage to hit these all earlier than six darts, go for the Bullseye! You gain an extra point by hitting 25, two extra points by hitting 2-3 25’s, three extra points by 4 or more 25’s – and remember bullseye or 50 is always 2 times 25.

So you’re using every turn exactly 6 darts, no less, no more.
In all five sections, the maximum score is 108 as total, so the maximum is 540 but you will be only shown your MICO-factor scores.

Even though Mikko’s idea was that this game must be played in one session, with one or two short breaks in between, I’ve now added the functionality to resume a started but not finished session. Mainly because I’ve had a few members reporting that their WiFi dropped in the middle of a session and that session was ruined. So, I recommend you to still finish the game in one session but with a short break after 20-30 minutes or so. 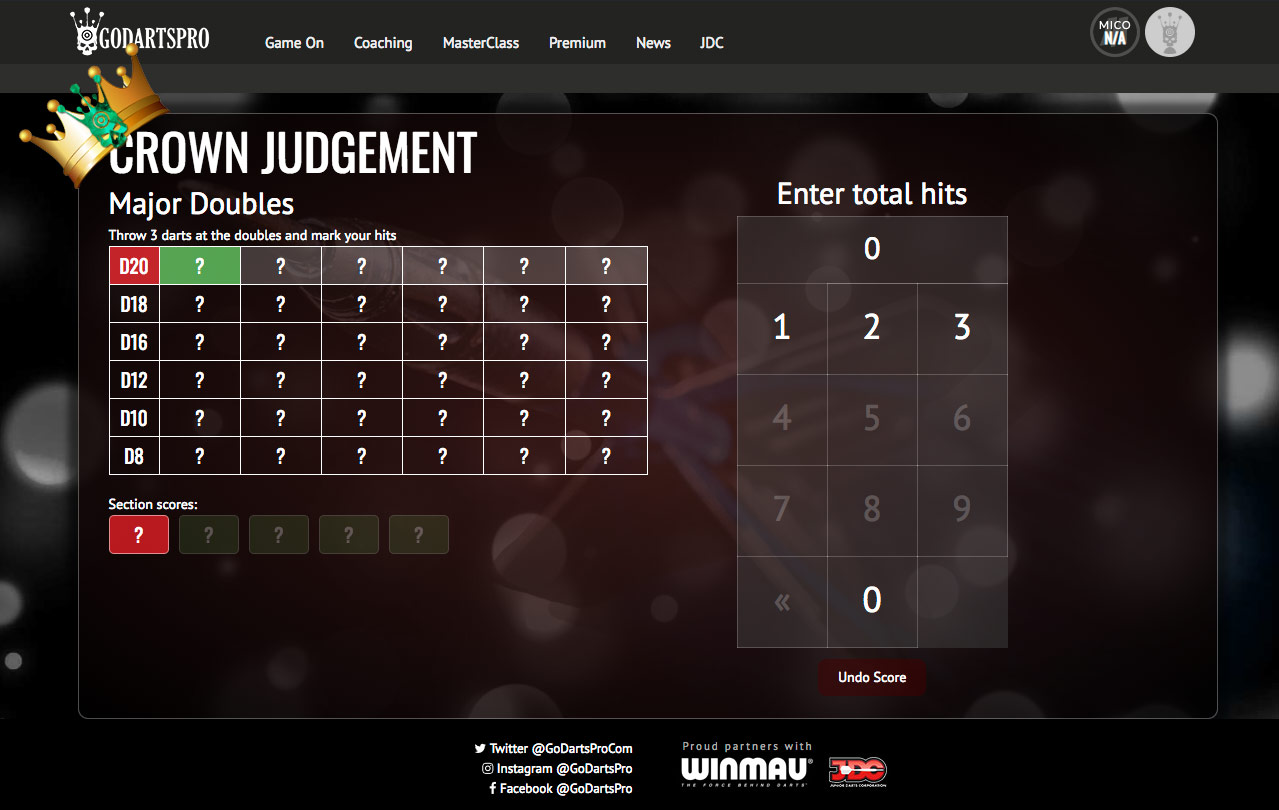 How to learn darts maths?

The power of good habits

More than More than 75 proper training games for you to make your darts practice fun, inspiring, interesting and addictive so you don’t even notice that you are improving!

Are you a Rookie
in the world of darts?

Go to our Rookie-page to read more about how to get started and check out our Starter Pack–concept.

Played darts for a while?

Get your Premium Membership to unlock the MICO-factor games now. Our MasterClass is the worlds’ first level-hopping game IRL darts, so that might be an inspiring challenge for you.

About
Privace & Policy
Support
We use cookies on our website to give you the most relevant experience by remembering your preferences and repeat visits. By clicking “Accept All”, you consent to the use of ALL the cookies. However, you may visit "Cookie Settings" to provide a controlled consent.
Cookie SettingsAccept All
Manage consent

This website uses cookies to improve your experience while you navigate through the website. Out of these, the cookies that are categorized as necessary are stored on your browser as they are essential for the working of basic functionalities of the website. We also use third-party cookies that help us analyze and understand how you use this website. These cookies will be stored in your browser only with your consent. You also have the option to opt-out of these cookies. But opting out of some of these cookies may affect your browsing experience.
Necessary Always Enabled
Necessary cookies are absolutely essential for the website to function properly. These cookies ensure basic functionalities and security features of the website, anonymously.
Performance
Performance cookies are used to understand and analyze the key performance indexes of the website which helps in delivering a better user experience for the visitors.
Analytics
Analytical cookies are used to understand how visitors interact with the website. These cookies help provide information on metrics the number of visitors, bounce rate, traffic source, etc.
Others
Other uncategorized cookies are those that are being analyzed and have not been classified into a category as yet.
SAVE & ACCEPT